Jackson had just turned 5 years old 2 months earlier, when on January 22, 2016, we got the news that no parents want to hear. They had found a large white mass in his brain MRI, a brain tumor. His GI Dr had requested the MRI, to rule out any other reasons that he was not growing, was vomiting everyday, and now had leg pains and severe headaches.

The Neurosurgeon confirmed that yes, he did have brain cancer, most likely, Pilocytic Astrocytoma, which is usually benign and slow growing, but his was not. He had surgery to remove the tumor, but it was too close to his spinal column to get it all. We were told that after surgery, he might not be able to walk, talk, or feed himself, but he got through with flying colors. Fast forward to 2018, he had gone through 2 rounds of aggressive chemo, but it wasn’t working, and cancer was spreading through his body, and we were told he might not make it more than 12 months, if we couldn’t find something to help him. We went to Iowa City Stead Family Children’s Hospital, and they found an experimental drug, still going through clinical trials at St Jude, that we would qualify for. It is now 3 years later, and he is a thriving 5th grader, and doing all the things, we were told he might never get to do.

Without Angels Among Us, we would have lost our home, lost our jobs, and lost our hope. They have been there for us from the very beginning, and we will always have a special place in our hearts for everyone there who have helped us along the way. 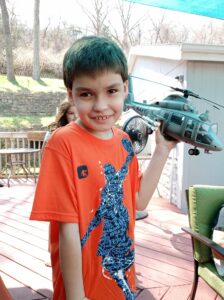