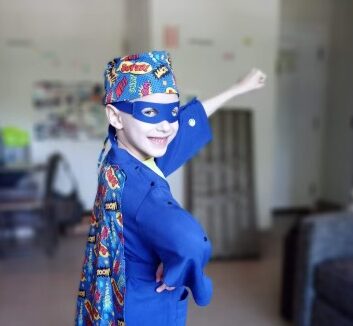 It all started right around Christmas when Gabriel started with a bad headache. We blew it off until he got another one a week later. We took him to the doctor and she thought it was no big deal. All of the sudden his one eye started to cross and as a mom of a boy I thought he was playing games and doing it on purpose. We observed his eye and as it got worse we knew we needed to see an eye doctor. We made an appointment for a week later and that appointment was the beginning of our nightmare.

The doctor told us Gabe had inflammation behind both eyes and needed to be seen at Children’s Hospital right away for an MRI and Lumbar Puncture. I had no idea what any of this meant and called my husband to meet us. When he arrived, I had begun getting a little nervous of all the unknown. At this point I don’t think the worst case scenario had even crossed our minds.

Once Gabe got back from the recovery room, we waited to hear the results and that felt like years. I remember talking to him when 3 people entered the room and wanted to know if we wanted to talk in front of Gabe or go somewhere private. I knew that wasn’t good. We chose to walk down the hallway to a conference room.

As a parent you aren’t really prepared to hear the words, “we found something in your child’s brain.” At that point I blacked out and had to ask them to repeat what they had just told me. “What did you say.”

“We found a large mass on your son’s brain and we need to transfer him to UNMC,” they told us.

I was in shock and my husband was speechless. I had no idea what to do or how I was going to look into my son’s eyes. As a parent you want to shield your child from everything bad. This was one thing that we didn’t have control over and it was the scariest feeling ever. 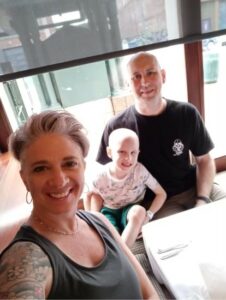